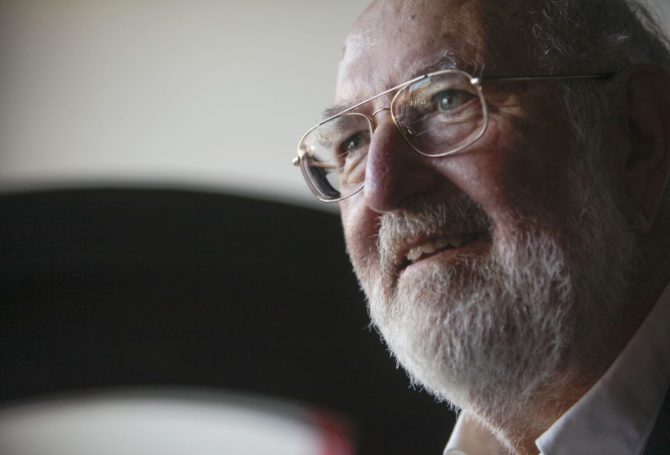 The passing last week of Rep. Mitch Greenlick prompted reflections about the mark the Portland Democrat left on Oregon’s health care system and our team’s interactions with him over the years.

CFM Partner Norm Eder first met and befriended Greenlick when he was a junior staff member for Multnomah County Executive Don Clark and Greenlick was director of the Kaiser Health Center. Clark was working on a local health insurance program for indigents and Greenlick was a chief adviser. “What they came up with,” Eder recalls, “was Project Health, an innovative approach to providing health care to the uninsured and strikingly similar to President Obama’s Affordable Care Act.”

Eder had just returned to Portland after completing his doctoral dissertation, which was a history of the national health insurance program that predated the NHS in Great Britain. That was a natural bridge to Greenlick, a fellow Ph.D., which forged a long-time friendship.

“Anyone who dealt with Mitch knows he didn’t suffer fools gladly,” Eder says. “But behind his crusty exterior, which grew crustier with age, was a sharp, principled mind that understood the system and held strong views about how it could be managed to deliver health care to everyone.”

Fiskum remembered meeting with Greenlick in a Northeast Portland restaurant where the representative liked to have a cup of coffee and a doughnut. “He wanted to talk about one of his top priorities, sending a ‘health care as a right measure’ out to a vote of the people,” Fiskum remembers. “There was no question that Mitch was committed to that approach to improve health care for everyone. I respected that commitment.”

CFM State Affairs Partner Dale Penn often worked with and against Greenlick as an advocate for Oregon’s largest hospital and health system. Penn recalls an important early lesson from the veteran lawmaker on preparedness.

“Mitch liked to play the devil’s advocate and pushed lobbyists to understand every angle of an issue in the search for better public policy,” Penn says. “In one of my first solo interactions with him, Mitch aggressively and intelligently questioned me on a health care issue I thought I knew inside and out. With his more than three decades of health care experience, he quickly taught me there were sides to the issue I hadn’t considered. He taught me the importance of over-preparing before advocating with any lawmaker.”

In an article over the weekend, Portland Business Journal reporter Elizabeth Hayes wrote, “[Greenlick] knew the ins and outs of Oregon health care policy better than most anyone in Salem. Over his 12-plus years as chair of the House Committee on Health Care, he fought hard for the causes he believed in, and championed bold ideas, usually centered on increasing health care access.”

Hayes noted Greenlick was instrumental in legislation that transformed Oregon’s Medicaid system by forming nonprofit, regional coordinated care organizations. He crafted legislation to modernize Oregon’s public health system, citing the 2015 Ebola outbreak as a “poster child” for change and presciently warning, “The bugs are gaining on us. Over the next decade, we’re going to be facing some terrible things, and the public health system is not ready to cope with it.”

CFM Principal Gary Conkling dealt with Greenlick less frequently, but they were allied on efforts to repeal Oregon’s death penalty. “Mitch was an active participant in a coalition that explored ways to eliminate capital punishment in Oregon,” Conkling said. “He understood the politics around the issue and supported legislation, which passed in the 2019 legislative session, that narrowed what qualified for the death penalty. He favored progress over posturing.”