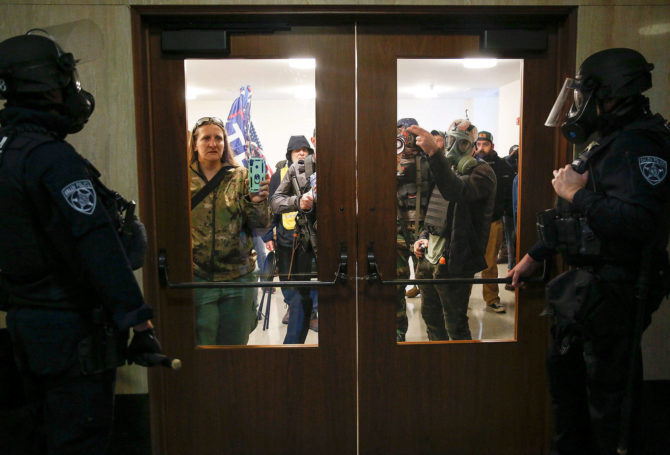 Floor votes, which were delayed by the intermittent skirmishes with protesters, were relatively uneventful since legislative leaders from both parties had acquiesced to the four bills Governor Brown requested. The exception came when the Senate came to order and Senator Dallas Heard, R-Roseburg, ripped off his mask and rose to condemn Brown and Democratic legislative leaders for failing to open the state to business. Senate President Peter Courtney, D-Salem, eventually turned off his mic and his GOP colleagues asked him to leave the Capitol.

The headliner bill to pass extended the eviction moratorium for another six months while allocating $200 million for landlord compensation and tenant assistance. Lawmakers were unable to reach a consensus before the special session on extending the residential mortgage foreclosure moratorium.

The eviction moratorium legislation, which passed by a 39-19 margin, didn’t please everyone. Landlords complained they will be required to forgive 20 percent of unpaid rent in return for state-provided compensation. Tenant advocates expressed concern about a requirement that renters must sign a sworn affidavit attesting their inability pay rent is linked to the pandemic.

Acknowledging the legislation wasn’t perfect, Rep. Julie Fahey, D-Eugene, said thousands of families could be booted out of their housing if the bill failed to pass. Rep. Mark Meek, D-Oregon City, said the bill unfairly forces landlords to waive their legal rights to eviction to qualify for financial relief. A proposal to give landlords a tax credit for unpaid rent failed to attract enough votes in the one-day session.

Meanwhile, a pair of landlords on Monday filed a legal action in federal court claiming the eviction bans are unconstitutional. Brown, the State of Oregon, Multnomah County and City of Portland are listed as defendants.

Limited liability for coronavirus lawsuits was touted by backers, including Senate Republican Leader Fred Girod, R-Lyons, as a necessary step for public schools to reopen.

Work sessions on the four bills afforded an opportunity for members of both parties to introduce a raft of amendments, which led to numerous recesses so legislative leaders could negotiate compromises. There was near agreement on a fifth bill to limit COVID-19 liability for hospitals and medical providers. In the end, final agreement was unattainable, so the concept will be re-introduced in the 2021 legislative session that convenes next month.

The cocktails to-go measure, which was backed by restaurant and lodging trade groups, allows bars and restaurants to sell two cocktails per substantive food orders. The legislation also limits how much delivery services can charge bars and restaurants. This authority expires 60 days after the end of Brown’s emergency declaration, which currently is set in March, but could be extended further.

Limited liability for coronavirus lawsuits was touted by backers, including Senate Republican Leader Fred Girod, R-Lyons, as a necessary step for public schools to reopen.

The bulk of financial aid – $600 million – to the legislative Emergency Board. Lawmakers dedicated $400 million to COVID-19 expenses, including distribution of newly approved vaccines. Another $100 million will be divvied up between wildfire victim relief and investments in wildfire prevention. The final $100 million was reserved for unforeseen contingencies.

Lawmakers, who will return for the 2021 session in just a few weeks, are seeking enhanced safety procedures in light of protester demands to access Capitol, which was closed for public health reasons. Courtney and House Speaker Tina Kotek, D-Portland, signaled that unimpeded access to the Capitol may not resume, at least anytime soon.