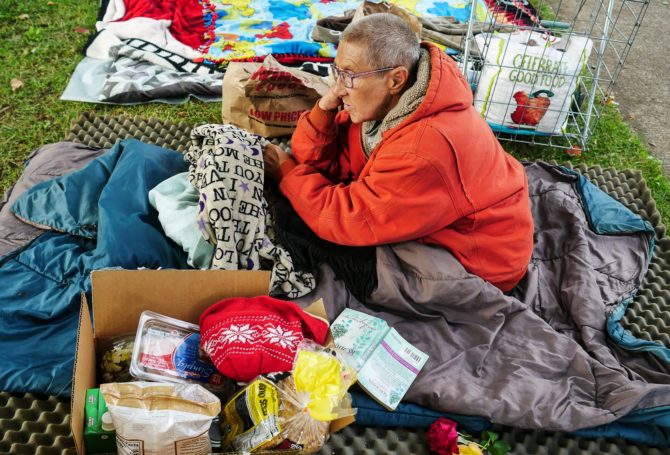 They Also Disagree on Why Homelessness Became a Crisis

Oregon’s three leading gubernatorial candidates agree the state has a serious homelessness crisis. They disagree on solutions and what to blame.

The responses reflect the personalities and policy inclinations of each candidate. Drazan is running as the change agent, Johnson portrays herself as the guardian of accountability and Kotek speaks like the architect of a plan that hasn’t been implemented fully or efficiently.

All three pledge to make homelessness a top priority, but with very different approaches. Drazan says a “housing-first response is a failed approach” and she would focus on ending Oregon’s “addiction crisis”. Johnson derides short-term fixes by “feckless politicians” and points to her support for the Bybee Lakes Hope Center, which received $2 million in state funding she helped secure. Kotek, expressing impatience, plans to form an emergency management team in her first 30 days in office to “not allow any more excuses of why local providers and governments can’t work better together.”

One of the sharpest disagreements is over Project Turnkey, which expanded the state’s shelter capacity by securing hotel and motel rooms to house people. Drazan and Johnson questioned the long-term costs of Project Turnkey. Kotek expressed support for the project and its continuation, noting Drazan voted against it and Johnson tried to block it in the Emergency Board.

Drazan attributes high rates of houselessness to drug addiction. Johnson scolds feckless politicians who are all talk and not action. Kotek blames a lack of coordination to implement programs already funded and in place.

An OPB summary of the three interviews includes a comment by state economist Josh Lehner from a previous story that attributes homelessness to a shortage of affordable housing. “When it comes to homelessness, specifically, there is a lot of research that has come out in the last decade that fundamentally homelessness is about the inability to afford housing. It seems self-explanatory, but I don’t know if that can be repeated enough. There are other places in the country that have mental health issues, drug addiction issues and high poverty issues, and at the same time they have lower rates of homelessness … People can still have mental health issues or drug addiction issues or live in poverty, but still have a roof over their heads because the housing is more affordable in other places.”

Some of the best quotes from the interviews include:

Drazan – “My opponents will say a lack of affordable housing is the primary driver, and while our housing costs are certainly a factor, a housing-first response is a failed approach that glosses over the more inconvenient truths about the crisis in our streets… To solve homelessness in the long term, we have to solve our addiction crisis as a state… We must balance the need to get people off the street and into a safe place to sleep with the need to address issues related to substance abuse and other untreated issues.”

Johnson – “We have elected too many feckless politicians who would rather talk about homelessness than do something about it and who go home at night unconcerned by the number of those who are sleeping on the streets with destroyed lives as the problem continues to erode our communities and their safety… Buying out motel and hotel rooms all over the state and filling them with homeless people only creates more problems.”

Kotek – “Oregon’s housing and homelessness crisis is complex and didn’t happen overnight. There are three main reasons for what we’re seeing today. Oregon has a housing supply and housing affordability problem… Oregon’s homelessness services system is too fragmented and existing resources must be better coordinated at the local level… Oregon is just now recovering from chronic underfunding of critical assistance to vulnerable Oregonians who simply cannot work and afford housing due to a serious mental illness, addiction or disability.”

The Oregon Community Foundation commissioned a study by ECONorthwest on the causes and cures of houselessness, which has grown to levels in Oregon that are disproportionately higher than many other states. The report indicated houselessness is a statewide problem, not just a Portland problem that will require sustained action. “Affordable housing and homelessness together represent a statewide crisis that must be tackled by all levels of government, philanthropy, nonprofits and businesses working together on collaborative solutions,” the report concluded.

The report made four specific suggestions – “Continued focus on increasing the supply of market rate housing and affordable housing, strengthening connections between affordable housing and homeless services sectors, identifying the appropriate scale of the emergency shelter system and providing intensive social services for people most at risk for chronic homelessness.” It also said attention should be paid to specific populations experiencing houselessness “including people of color, veterans and children.”