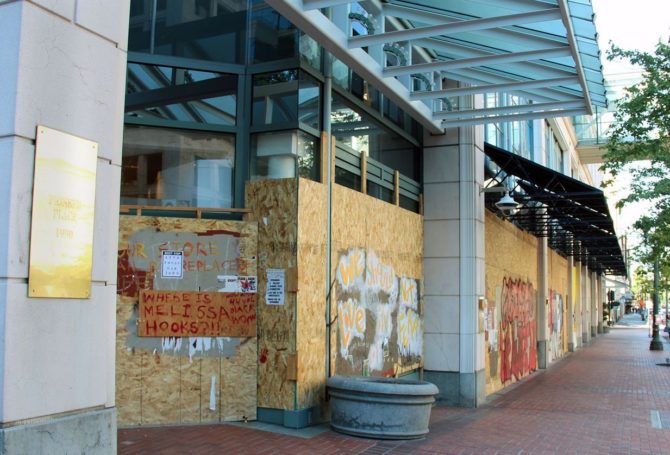 A Portland economist writing in Forbes calls riot-scarred Portland the new Pompeii. State economist Josh Lehner says Oregon may have lost its luster as the place to live if you can live and work anywhere. Both forecasts raise concerns about the continued viability of downtown Portland and the state’s ability to generate more income tax revenue to keep pace with rising spending.

In an article published in Forbes last month, Portland-based economist Bill Conerly compared Portland to Pompeii, the ancient Italian city smothered by a sudden volcanic eruption. He speculated: “Continued violence and vandalism have combined with high housing costs, homelessness and poor community leadership to raise the question: How long before this city dies?”

“Reputation may be Portland’s greatest damage. Coverage by newspapers, television and current affairs podcasts has been extensive, both across the country and worldwide,” Conerly wrote. “This is critical given that the area’s growth comes from in-migrants, mostly from other states in the United States. Real estate developers and investors have significantly downgraded their attitudes about Portland real estate.”

Slowing in-migration also caught the attention of Lehner. “Oregon’s population grows faster than most states’,” Lehner writes. “These gains are primarily due to domestic migration patterns. Most people who move here are 20- and 30-somethings. As such, migration provides an ample supply of mostly younger, mostly skilled labor that allows local businesses to hire and expand at faster rates.”

A new ranking by the Urban Land Institute (ULI) confirms Portland’s reputation has plummeted in the view of real estate investors from #3 in the nation as recently as 2017 to #66 last year. Young adults also have soured on Portland in favor of Raleigh/Durham, Austin and Nashville, according to U-Haul migration records.

As reported by Nigel Jaquiss of Willamette Week, “So why does reputation matter? If people who can choose to live anywhere no longer choose Oregon, that will impact government’s ability to pay for services such as health care, education and public safety upon which most of us depend.”

Lagging in-migration could aggravate another trend. For the first time in the state’s history, deaths outnumbered births in 2020. Given Oregon’s natural aging population and low birth rate, it was projected to happen in a few years even without the pandemic, Lehner says. “If population growth slows below forecast,” he warns, “all of Oregon’s forecasts would need to be lowered; this goes for private-sector business sales and public tax revenues alike.”

Dr. Mike Wilkerson, director of analytics for EcoNW based in Portland, told KOIN-TV he believes Portland’s reputation has suffered because of negative national headlines surrounding protests in the last year, amplified by tweets by then-President Donald Trump. He said wildfire smoke blanketing Portland last year also contributed to the city’s drooping reputation as Portland building permits dropped by 27 percent in 2020, according to City officials.

If people who can choose to live anywhere no longer choose Oregon, that will impact government’s ability here to pay for services such as health care, education and public safety upon which most of us depend.

Wilkerson offers a ray of encouraging news, suggesting that young adults may not be as put off by street protests as older adults and business owners. “Certainly we have a lot of uphill battles to address here and we’ve been a little bit slow, if anything, in responding to some of these things,” Wilkerson says. “If the (ULI) report helps catalyze everyone’s focus on this, maybe we can remedy some of the circumstances that got us here.”

Even then, young adults may switch their preference to non-urban environments where rents are lower and they can afford larger apartments. The movement of younger adults to the suburbs was underway before the pandemic and has accelerated with the rise of remote working in many white-collar professions – and closure of downtown bars and clubs.